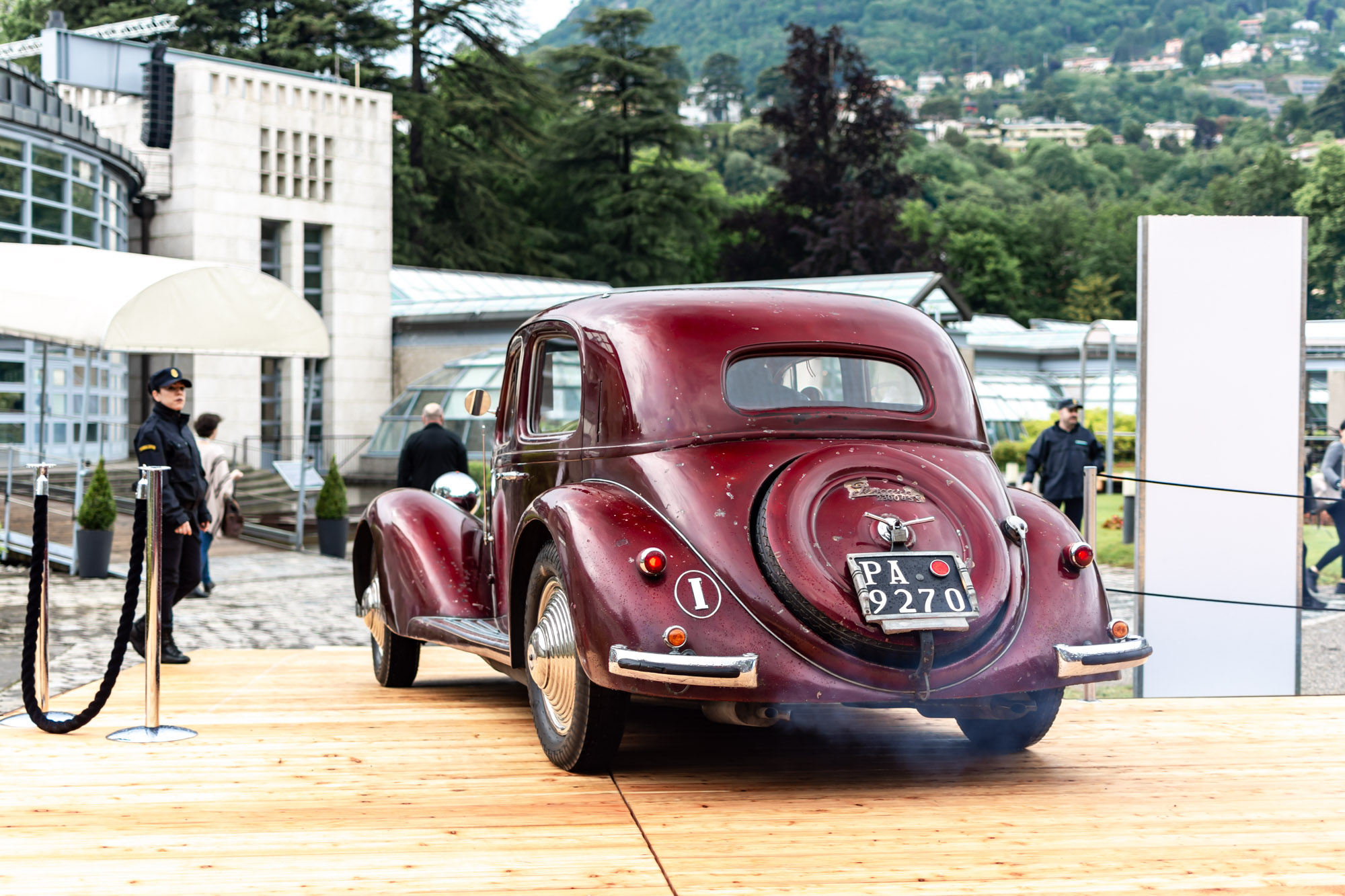 The Concorso d’Eleganza Villa d’Este event is doubtlessly crème de la crème of the automotive events throughout the year and there have always been plenty of attractions during the weekend. However, ever since 2011, there is one more biennial occasion to celebrate – the RM Sotheby’s Auction at Villa Erba. This year was the fifth edition of the sale coinciding with the main concours and it was definitely one to remember. For me, personally, it was one more thing to look forward to when heading to Cernobbio, as back in the 2017, when I visited Concorso for the first time, I unfortunately missed the auction.

There is a reason Concorso d’Eleganza chose RM Sotheby’s as their partnering auction house. One of the leading companies on the automotive market, they are well known for being able to provide with small, high-quality and extraordinary set of lots, which fits in perfectly with Concorso’s philosophy.

This year was not any different and RM Sotheby’s did a World-class job by providing the bidders with more than fifty cars and a compelling set of various memorabilia. Interestingly, at the same time, this has been their biggest auction at Villa Erba to date. Even though the scale increased, the vehicles were displayed tastefully under a built-up hall and the exposition was not overwhelming. The limited space under the tent made it quite difficult to get a clean shot, but the structure saved the day later, when the heavens opened with pouring rain.

What was on sale? Long story short, there were two killing headliners – Porsche 550A Spyder and Ferrari 500 Mondial. If these two legends did not make too big an impression, they were followed by several cars bodied by Zagato, to commemorate the coachbuilder’s 100th anniversary. These included a Fiat 8V, Lancia Flaminia 3C, few modern Aston Martins as well as two special Ferraris – 348 TB Zagato Elaborazione and truly a ‘hate it or love it’ 330 GTC Zagato.

Auctioned were many more lots than listed above and the remaining ones were not any less interesting. If a person had the means, he or she could consider investing in a fantastic 1961 Maserati 3500 GT Spyder or Lancia Aurelia B52 Coupe, both bodied by Vignale. Carrozzeria Touring was represented by cars such as 1948 Alfa Romeo 6C 2500 Super Sport Coupe and a Lamborghini 400 GT 2+2, whilst Bertone bodies were seen in the likes of 1965 ASA 1000 GT Coupe and 1973 Alfa Romeo 1300 Junior Stradale.

Not only were the classic cars auctioned, but there were also quite a few modern vehicles set for sale. Starring in this category were two McLaren Mercedes’ SLR – a 2009 Stirling Moss and a 2008 SLR Roadster. There was also a 2004 Maserati Trofeo Light, which was absolutely killing it with the sound of its V8 racing engine, and a 2010 Porsche 911 Sport Classic. Topping the pinnacle-of-engineering family was the 2015 McLaren P1 and a year older Ferrari F12 Tour de France. Can you now see my point about the stunning selection?

In addition to all the top-notch automobiles, RM Sotheby’s offered two vintage motorboats – a 1958 Riva Tritone “Via”, very symbolic for the Lake Como and a year younger 1957 Liuzzi Lido Runabout “Sois Sage II”, which came in rather affordable at 24 thousand Euros! However, the cheapest to buy were obviously all the memorabilia, such as various blueprints, brand signs, manuals and tool kits. The latter seemed like a Ferrari collector’s dream, for they were offered for a 250SWB, 275 and the Daytona! If I only owned the car, and just missed the original manual… From the more interesting items, one could even buy a wooden Ferrari 275 GTB front end!

STARS OF THE SHOW AND PERSONAL FAVOURITES

Hard to believe, but even in such a stunning line-up of classic automobiles there are always the so-called show stealers and cars, which appeal to one person more than to the other. As an obvious step, let us focus first on the sheer spotlight duo, created by the Italian-German couple – Porsche 550A Spyder and Ferrari 500 Mondial.

The rare vehicle from Stuttgart was scarce from the very production, with only 40 built in total. The presented model from 1957, namely chassis 0121, was the production number 15 and the only 550A ever sold new to Denmark, where it competed in its early days. Interestingly, the car has been sold in 1958 to a British racing driver residing in Kenya John Manussis, who competed with it in the East African Safari Rally several times. In 1978 it was sold again, to the Italian collector Giuseppe Freschi, who owned the car for astonishing 31 years. After changing hands once more, the car was thoroughly restored, and at the moment of sale has been driven for only 100km! The superlight sportscar, weighting hardly 530kg, was powered by a flat-four engine, which sound could only be beaten by…

A cold start of the 1954 Ferrari 500 Mondial Spider by Pinin Farina inline four engine. The engine could not ignite when preparing for the drive-through auction, therefore the RM Sotheby’s staff worked hard to bring it back to life. When the carburettors were swamped with starter, the sound was incomparable to any engine I have ever heard in my life. If only words could tell that melody! The car itself was rare, too, being only one-of-five Pinin Farina Spiders bodied in “covered headlights” style. When brand new, the car raced for Scuderia Parravano at Palm and Willow Springs, to be sold later to Mexico, to Javier Valesquez, who continued to put this stunning vehicle to race at Carrera Presidential Race. Recently, in April this year, after just three long ownerships, the car has undergone a complete overhaul by Ferrari Classiche and was more than ready to change hands for the fourth time.

Whilst the duo described above topped the charts in terms of notoriety and sales price, as they were sold for 3.4 and 3.7 million Euros respectively, I had two more favourites on my list – the 1967 Ferrari GTC by Zagato and 1936 Delahaye 135S. Both were not sold, so if I had 475 thousand for the former and even 1.3 million Euros for the latter, I could have brought them home! Unfortunately, I did not.

The Ferrari by Zagato truly is a car that you either love, or cannot stand. The design is so controversial, that I am sure the visitors were split in precisely two groups, with no one in-between. Zagato presented this stunning creation in 1974 at the Geneva International Motor Show, bodied in sharp angles and equipped with removable targa-style roof. As of now, it remains the only 330 GTC by Zagato left. How is that for uniqueness?

My second favourite shall be called by its very long name – Delahaye 135 S Compétition Court in the style of Chappe Frères. The exhibit has a vivid racing history, starting in 1936’s 3 Hours of Marseille as well as 24 Hours Le Mans, which turned out to be cancelled due to strikes in France. However, the car returned to Le Mans in 1939, which makes it all-so-iconic. This automobile’s’ long name refers to the aerodynamic style, in which three Delahaye 135S were rebodied by Chappe Frères. Back in the days this particular model had a nickname of “Blue Buzz II”, given after its sky-blue colour and a specific engine sound. As much as I am not a huge fan of pre-war cars, this one had me at hello. How could it not – just look at its details!

POURING RAIN COOLING THE ATMOSPHERE DOWN

The doors of Villa Erba were open for visitors from the very morning. Guests could admire the motorcycles taking part in the Concorso di Motociclette as well as to visit the BMW Classic exhibition at Padiglione Centrale. Auction was open only for registered buyers, for press and after purchasing the auction catalogue.

Whilst the weather was pretty good for the best part of the morning and afternoon, with sun shining bright through some rather small clouds, heavens opened completely at around 5 o’clock. Pouring rain brought every single auction participant under the built-up hall and RM Sotheby’s crew was busy pushing some of the classics a little bit more under the roof. Some of the newer exhibits were left outside, giving a chance to picture them in the all-different scenery to what it usually looks like at Villa Erba.

The rain stopped after two, long hours, leaving nothing but gigantic puddles all around the Villa Erba’s beautiful garden and a dark sky overhead. Luckily enough, the grounds had few quarters to soak in the water, enabling bidders and guests to move across the lawn to the Grand Stand where the auction happened.

THE SHOW MUST GO ON AND… HAS RESULTS

The auction was organized as a drive through, which makes the whole event much more fun. Cars were driven from the exposition shelter, through the very wet garden all the way to the Grand Stand – the very same, on which the Sunday’s Parade at Concorso d’Eleganza takes place, just in the other direction.

The auction started slowly with majority of the memorabilia being offered first and the cars following shortly. For 54 vehicles offered the hammer went down 31 times, resulting in quite a good sale rate at 57 percent. More importantly, the total selling price for those reached an impressive level of 19.7 million Euros, making the auction a success for RM Sotheby’s.

Five cars were sold for more than one million Euros. Together with the two stars described above, the podium was complete with 1964 Aston Martin Short-Chassis Volante. This 1 of 37 roadster was sold for a bit more than 1.8 Million Euros, just 35 thousand more than 1 of 26 Fiat 8V Coupe by Zagato, built in 1955. Clinching number five was a 1931 Bugatti Type 50 Roadster. One of only two extant with the original coachwork designed by Jean Bugatti and powered by a supercharged, eight-cylinder engine, it changed ownership for just above 1.4 million Euros.

When the last car had been driven away from the Grand Stand towards Padiglione Centrale, huge applause went on and people rushed out. Another rainfall was coming and there was one more exciting day to look forward to tomorrow – Concorso d’Eleganza.

Thank you, RM Sotheby’s, for a day full of stunning automobiles at Villa Erba – looking forward to what the 2021 Auction could bring!